Venture X hopes to open in late June in 13,000 square feet on the second floor of tower one of the Colorado Center, at 2000 S. Colorado Blvd., according to operator Michael Patton.

Patton said he has purchased franchise rights from Venture X for a majority of the Denver market, primarily south of downtown.

He said he’s scouting locations in Highlands Ranch and wants to open there after the Denver location is operational.

Venture X opened in Naples, Florida, in 2012, and now has five locations in Florida, Texas and Ontario. The company’s website lists 15 more locations as “coming soon,” including the two planned by Patton.

Patton, 49, of Cherry Hills Village, said his background is in cybersecurity, including a past executive position with California-based ForeScout Technologies. He said he wanted to go into business for himself.

Patton said that, in a good economy, coworking benefits from intense demand for office space. In a bad economy, users aren’t locked into long-term leases. 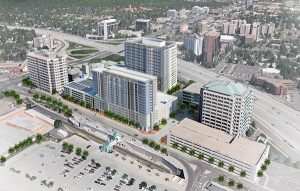 Rendering of the Colorado Center on Colorado Boulevard. (Venture X)

He said he’d be hesitant to open downtown and compete with more than 1 million square feet of coworking. But he said the southern part of the city and its suburbs are underserved.

“There’s a lot of people who have small businesses in Denver, and a lot of them live south of downtown,” he said.

Patton said about 80 percent of the Venture X space will be devoted to 33 private offices, with the remaining space featuring shared desks.

Patton said he believes other parties are interested in Venture X franchise rights to the downtown and Boulder-Longmont areas.